There are many sources suggesting that you cannot use a universal remote with Amazon Fire TV line of streamers. This is because none of the Fire TV products including the original Fire TV Box, Stick, Pendant, and Cube do not have a built-in infra red (IR) receiver like most consumer electronic A/V devices. Thus, universal remotes which use IR won't work with the Fire TV. Instead, you must control the Fire TV with Amazon’s proprietary remote.

Until now, there were no complete options available for single remote control of all devices when using the Fire TV. To address this issue, Inteset Technologies provides a simple, USB-based, plug-and-play IR receiver that is compatible with the Amazon Fire TV product line called the IReTV. Now you can control all of your equipment with one universal remote. The IReTV works directly with with both the Inteset Int-422 and Logitech Harmony line of universal remotes.

Setting up the Fire TV with the IReTV IR Receiver

If you have the Amazon Fire TV Cube, Stick, or Pendent device, you’ll need the Inteset USB Y cable that facilitates a USB data and power connection from the single micro USB port available on the Cube, Stick and Pendant. Setup is as shown in the diagrams below. 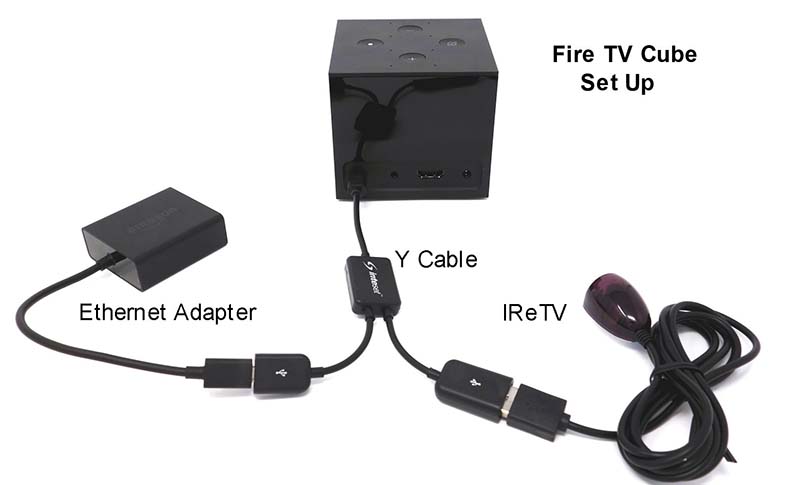 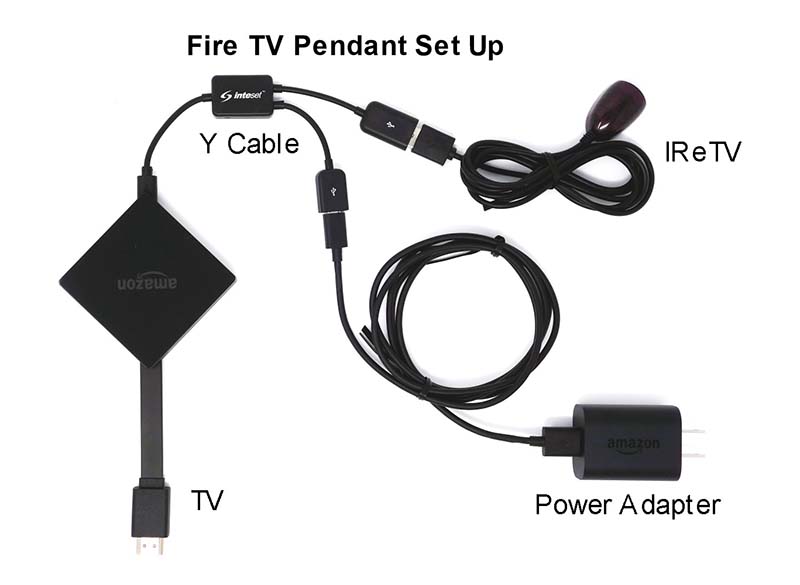 If you have the original Fire TV box, simply plug the IReTV into the USB port of the Fire TV as shown in the diagram below. Position the IR receiver end of the IReTV in a location that is line-of-site from where you'll be using the remote. Note that the Fire TV may be positioned behind closed doors, or behind the TV. 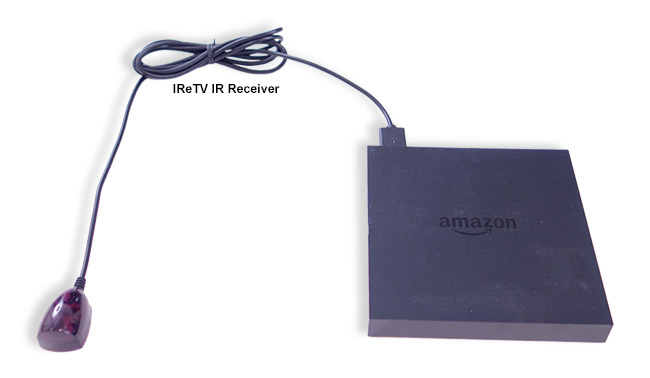 Programming the Inteset Int-422 for use with the IReTV and Fire TV is no different than the setup for use with any other device:

You can view the button mappings of the Inteset Int-422 remote for the Fire TV here.

Programming the Logitech Harmony for use with the IReTV and Fire TV is no different than the setup for use with any other device. Follow the remote’s instructions for Device Setup included with the Harmony. Note that Inteset is currently working with Logitech to add the IReTV/Fire TV to the Harmony device database. In the meantime, when prompted to enter the manufacture and device to set up, enter Microsoft and Xbox 360 (the IR codes sent from the remote to control the Fire TV use the same IR codes as for the Xbox 360).

You can view the button mappings of the Harmony remote for the IReTV and Fire TV here.